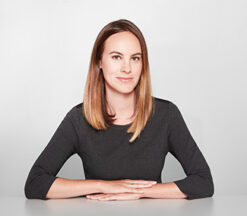 With almost 10 years of experience, Katharine Montpetit brings a wealth of insight to her work at Rubin Thomlinson. She is called on for her responsiveness to clients, her eagle-eyed attention to detail, and the efficiency of her investigations. Katharine is passionate about drawing out the different perspectives in even deeply fraught situations — deftly facilitating trust and candour.

Katharine’s expertise is in conducting sexual violence and sexual harassment investigations. She is trained in a trauma-informed approach to investigations. She has conducted these investigations for a variety of clients and has done extensive work for elementary, secondary and post-secondary institutions, as well as for the media and entertainment sector. She is also experienced in conducting workplace assessments where systemic issues of sexual misconduct and gender discrimination are involved.

Katharine has previously acted as a Team Lead, where she was responsible for overseeing a team of investigators, providing guidance and advice regarding process and best practices in investigations.

In addition to her area of expertise, Katharine has also conducted and provided oversight of investigations and workplace assessments across a broad range of subjects.

Before joining Rubin Thomlinson, Katharine was an investigator with the College of Nurses of Ontario, successfully fielding many highly sensitive complaints — including ones of sexual abuse, physical abuse, and privacy breaches. She became especially adept at cases with complicating factors — from responsibly and respectfully interacting with stakeholders who were survivors of previous sexual abuse, to investigating cases with complainants with mental health issues. She also conducted training on the principles of professional governance. By the end of her tenure there, she had risen to directing a team of nine investigators.